Liang Hung-chih ^ ^ ^^ T. Chung-i ^ S Liang Hung-chih (1883-9 November 1946), influential member of the Anhwei clique and the Anfu Club who became a prominent official in Japanese-sponsored regimes. He was executed for treason by the National Government in 1946.

A native of Ch'anglo, Fukien, Liang Hungchih came from a prominent family of scholars and officials. His great-grandfather, Liang Chang-chu (ECCP, I, 499-501), was a distinguished scholar and an outstanding governor of Fukien. When Liang Hung-chih was six sui, his grandfather was assigned to the Chinese consulate at Nagasaki, and the entire family went to Japan for two years. Liang received his education in the Chinese classics in Japan and then in Ch'anglo. After passing the examinations for the chü-jen in 1903, he enrolled at the Imperial University of Peking. Little is known about his activities immediately after graduation. Some sources say that he served as an oflficial in Shantung and then taught at the Fengtien Higher Normal School; others state that he joined the staff of Tuan Ch'i-jui (q.v.). After the revolution of 1911, Liang Hungchih served in the republican government at Peking as secretary, senior assistant, and then counselor in the bureau of laws, which drafted and examined government orders and legislation. About 1914 he was appointed to the Sucheng chü, a predecessor of the Control Yuan. The death of Yuan Shih-k'ai in June 1916 and the rise to power of Tuan Ch'i-jui advanced Liang Hung-chih's career. He became an influential member of the Anhwei clique and the Anfu Club {see Hsü Shu-cheng) and served as secretary general of the National Assembly in 1918. When Tuan was defeated by the Chihli faction of Ts'ao K'un and Wu P'ei-fu (qq.v.) in 1920, Liang sought refuge in the Japanese embassy. In 1922 he moved to Shanghai and then to Mukden. After the Chihli group was defeated by Chang Tso-lin and Feng Yü-hsiang in 1924 and Tuan Ch'i-jui became provisional chief executive of the Peking government, Liang returned to Peking to serve as secretary general of the chief executive's office. He resigned from office on 27 November 1925 and went to Tientsin. In 1925 Liang joined the Japanese-sponsored General Committee on Eastern Cultural AfTairs. His decision to move to Dairen about 1928 may have been the result of his pro-Japanese sentiments. However, he moved to Shanghai after the Japanese attack at Mukden on 18 September 1931. In the mid-1930's he published a collection of poems, the Yuan-chu-ke shih-chi. Liang remained in Shanghai after the Sino-Japanese war began in 1937. At the end of 1937, the Japanese army in central China, having organized several local puppet governments in areas which had come under its control, decided to establish a central puppet regime similar to the provisional government at Peiping sponsored by the Japanese army in north China. On 28 March 1938 the Wei-hsin, or reformed, government, with jurisdiction over the Japaneseoccupied areas of Kiangsu, Chekiang, and Anhwei, was established at Nanking. Liang Hung-chih was persuaded to head the new regime. The reformed government at Nanking was composed of three major organs: the executive yuan, headed by Liang Hung-chih; the legislative yuan, headed by Ch'en Ch'un; and the judicial yuan, headed by Wen Tsung-yao. The state council, composed of the presidents and vice presidents of the three yuan and the ministers of the executive yuan, was the highest policy-making body. The announced policies of the reformed government at Nanking were opposition to Communism, non-recognition of the National Government, and close cooperation with Japan. In the autumn of 1938 representatives of the provisional government at Peiping and the reformed government at Nanking met in Dairen. On 22 September they agreed upon the establishment of a joint committee of the governments of China, to be composed of Wang K'o-min, Wang I-t'ang (qq.v.), and Chu Shen of the provisional government and Liang Hungchih, Wen Tsung-yao, and Ch'en Ch'un of the reformed government. The committee, meeting alternately in Peiping and Nanking, was to be given control oftransportation, communications, postal service, customs, education, and foreign affairs. After this conference ended, Liang Hung-chih went to Tokyo, where he met with Japanese officials on 15-17 November. In the meantime, Wang Ching-wei (q.v.) had left Chungking and had gone to Hanoi, where, on 29 December 1938, he called for peace with Japan. In May 1939 he went to Shanghai for negotiations with the Japanese authorities. It was decided that Wang would head a central government of occupied China but that the provisional government at Peiping would retain its autonomy within the new framework. After Wang met with Liang Hungchih and Wang K'o-min on 18-20 September, the joint committee of the governments of China issued a declaration supporting the establishment of a central government under the leadership of Wang Ching-wei. When the new regime was established at Nanking on 30 March 1940, Liang Hung-chih vacated the presidency of the executive yuan in favor of Wang Chingwei and became the president of the control yuan, a position of little power.

Liang, an avid collector of rare books and paintings, took advantage of wartime conditions, which forced many families to sell their treasured collections, to assemble a group of 33 specimens of Sung painting and calligraphy. In 1940 he sponsored the publication of the Ming-shih-la [veritable records of the Ming dynasty] , the manuscript having been discovered in a hidden wall niche at the Kiangsu Library of Chinese Studies.

When the War in the Pacific ended in 1945, Liang Hung-chih went into hiding in Soochow. He was discovered by Nationalist agents and was brought to Shanghai for trial. In prison he wrote two collections of poems, "Ju-yu chi" and "Tai-ssu chi," and an account of the Chihli- Anhwei war. These manuscripts, which he entrusted to his fellow prisoner Chin Hsiung-pai, later disappeared. Although testimony at his trial indicated that Liang had cooperated secretly with the National Government on several occasions during the war, he was sentenced to death as a traitor. He was executed in Shanghai on 9 November 1946. 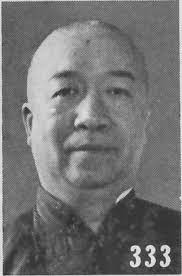