Li Te-ch'uan (1 July 1896-), the wife of Feng Yü-hsiang (q.v.), became prominent in Chinese women's organizations during the Sino-Japanese war. From October 1949 to December 1964 she served the Central People's Government as minister of health.

Fuhsingchuang, Chihli (Hopei), a community of Chinese Christian survivors of the Boxer Rebellion, was the birthplace of Li Te-ch'uan. Her father was a well-to-do peasant w-ho became a Christian minister, and she was baptized at the age of three months. Li is known to have had one brother and two younger sisters. After receiving her primary education at the Goodrich Fu Yü Girls School, she went to Peking about 1912 and enrolled at the Bridgman Girls Middle School, an institution run by American Congregational missionaries. Upon graduation, she received a loan from Bridgman that enabled her to enroll at North China Union Women's College.

After completing her studies, Li Te-ch'uan returned to the Bridgman Girls Middle School to teach biology. She later was employed on a part-time basis by the American Board of Commissioners for Foreign Missions and was given responsibility for women's activities at the Tengshihk'ou Church. In addition, she worked part-time as secretary of the students department of the Peking YWCA. Her YWCA responsibilities increased steadily in the next few years. In 1923 Robert Gailey, an Ail- American football center from Princeton who was serving as secretary of the Peking YMCA, introduced Li to the man known as the Christian General, Feng Yü-hsiang (q.v.). She and Feng were married on 19 February 1924.

When Feng Yü-hsiang agreed in 1925 to permit Kuomintang political work in his Kuominchün in return for Russian instructors and military aid, Li Te-ch'uan helped draw up the programs for troop education and indoctrination. The resulting programs emphasized Christian teachings and devoted comparatively little time or attention to political matters. Li accompanied Feng to Urga (Ulan Bator) and Moscow in 1926. Upon their return to China, he issued a long statement on 16 September 1926 declaring allegiance to the Kuomintang. After the so-called enlarged conference movement [see Yen Hsi-shan; Wang Ching-wei) against Chiang Kai-shek collapsed in the autumn of 1930, Feng went into retirement. He and Li lived in Kalgan until mid- 1933 and in Shantung on the sacred mountain T'ai-shan until 1936, when they went to Nanking. After the Sino-Japanese war broke out and the National Government moved to Chungking, Feng held office as minister of water conservancy and a member of the Supreme National Defense Council. Li Te-ch'uan soon became a leading figure in women's organizations. She was active in the Chinese National Women's Association for War Relief, and she later became president of that body and of the Chinese Women's Christian Temperance Union, as well as executive directorof the women's section of the Chungking Sino-Soviet Cultural Association. At war's end, she helped organize the Chinese Society for the Advancement of Cultural Welfare.

In January 1946 Li Te-ch'uan w^as elected to the military studies committee of the Political Consultative Conference. She also was elected to the National Assembly, but before it convened, the National Government announced that Feng Yü-hsiang would head a mission to the United States to study conservation and irrigation facilities. Feng and Li sailed from Shanghai in late September. Li attended the meetings of the International Assembly of Women in New- York in October. She, Feng, and their two sons and three daughters established residence in California, and Feng followed about a third of the itinerary planned for him by the United States government before discontinuing his tour of conservation projects. In 1947 he made speeches attacking Chiang Kai-shek and the National Government. He was recalled to China in December, but he refused to go, explaining publicly that his life would be forfeit if he returned to Chinese Nationalist territory. In January 1948 he was expelled from the Kuomintang for disloyalty. He soon became a registered agent of the Revolutionary Committee of the Kuomintang, founded by Li Chi-shen (q.v.) and other dissidents at Hong Kong. In July 1948 Li Te-ch'uan and Feng Yühsiang boarded the Russian ship Pobeda for a trip to Odessa. Feng died on 1 September when a fire broke out on the ship in the Black Sea. After the ship landed at Odessa, Li Tech'uan traveled through the Soviet Union to Manchuria. In February 1949 she went to Peiping, which had been occupied by the Chinese Communists. She became vice president of the All-China Federation of Democratic Women in April and served as a delegate to the Congress of the Partisans of Peace at Prague. Upon her return to China, she became a member of the preparatory committee for the Chinese People's Political Consultative Conference and a central committee member of the Revolutionary Committee of the Kuomintang. In September, she served as a delegate from the All-China Federation of Democratic ^Vomen to the Chinese People's Political Consultative Conference and as a member of the conference's National Committee.

With the establishment of the Central People's Government on 1 October 1949, Li Te-ch'uan became minister of health. She received membership in the culture and education committee of the Government Administration Council, the national committee of the China Committee To Defend ^Vorld Peace (later the China Peace Committee), and the executive board of the Sino-Soviet Friendship Association. In 1950 she became vice president of the People's Relief Administration and president of the Chinese Red Cross Society, and in 1951 she became a vice chairman of the Chinese People's Committee for the Protection of Children. In these capacities, she traveled extensively throughout the 1950's, representing the People's Republic of China at conferences of the International Red Cross and other health organizations and at meetings of the World Peace Council. She also led Chinese women's delegations to Pakistan, Italy, and Yugoslavia and to international women's conferences. In addition, she was a member of the Chinese delegation to the funeral of Josef Stalin in March 1953.

Li Te-ch'uan was elected to the Standing Committee of the Chinese People's Political Consultative Conference^ in 1953 and 1959. She participated in the National People's Congress of 1954 as a delegate from Hopei and as a member of the presidium. That year, she also was appointed a director of the Chinese People's Association for Cultural Relations with Foreign Countries and vice chairman of the Sino- Soviet Friendship Association. In 1956 she became vice chairman of the Asian Solidarity Committee of China (later the Afro-Asian Solidarity Committee), a member of the State Council's scientific planning committee, and a member of the presidium of the National Conference of Advanced ^Vorkers. She became head of the Sino-Korean Association when it was organized in 1958, and in December 1958 she joined the Chinese Communist party. In May 1962 Li Te-ch'uan was accorded the unusual honor of being appointed honorary president of the Cuban Red Cross. She continued to work with great energy and success in the field of public health in China until December 1964, when she was retired from the ministry of health. She then became one of the t^•enty-two vice chairmen of the Chinese People's Political Consultative Conference. 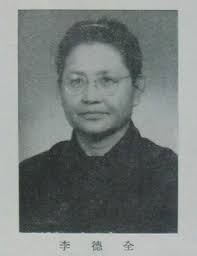