Liang Shu-ming (9 September 1893-), attempted a new formulation of Confucianism while teaching at Peking University in 1917-24. From 1927 to 1937 he was a leader in the rural reconstruction movement. Thereafter, he was active in "third force" politics and helped to form the coalition that became the China Democratic League. Although he lived in the People's Republic of China after 1949, he refused to accept Marxism-Leninism as a valid ideology for China.

A native of Kweilin, Kwangsi, Liang Shuming was born and raised in Peking. His father, Liang Chi, w as a respected metropolitan official who established rehabilitation and vocational schools for convicts and poor children. Liang Shu-ming attended a modern primary school, where he learned English, the Shun-t'ien Middle School, and the Chihli Public Law School. During his student days, he was attracted to utilitarianism. On the eve of the revolution in 1911, he joined the Peking- Tientsin chapter of the T'ung-meng-hui and helped smuggle bombs and rifles to the revolutionaries. In 1912 he worked as a reporter for the Tientsin Min-kuo pao [republican newspaper] . In 1 9 1 3 because offamily disagreements and his own disillusionment with the republican cause, he turned to wei-shih, or "consciousnessonly," Buddhism and spent three years in semiseclusion. In 1916 Liang Shu-ming became the private secretary of his relative Chang Yao-tseng, who was serving as minister of judicial affairs at Peking. Ts'ai Yuan-p'ei (q.v.), who had been impressed by an article on Buddhism which Liang had contributed to the Tung-fang tsa-chih 'Eastern Miscellany), soon invited him to join the faculty of Peking University. Liang accepted this offer in 1917, when Chang Yao-tseng was forced out of office by Chang Hsün (q.v.) during Chang Hsün's attempt to restore the Ch'ing dynasty to power.

Liang Shu-ming reexamined his beliefs in 1918 after his father committed suicide. He came to believe that thought must always vindicate itself by providing a view of life which is personally satisfying and a general explanation of society and social problems which can serve as a blueprint for action. He turned from both utilitarianism and Buddhism to his own version of Confucianism.

After formulating and presenting his Confucian ideas in lectures, Liang published Tunghsi wen-hua chi ch'i che-hsueh [the cultures of East and West and their philosophies] in 1921. Seeking to show that Chinese cuhure was relevant to the modern world, he identified the West, China, and India as three basic cultural types, ultimately differentiated from each other by the subjective attitude, or will, which informs and characterizes the attempts of each one to solve the problems posed by its environment. According to Liang, the Western will, the "attitude of struggle," seeks to wrest the satisfaction of its desires from the external world or from other people; the Chinese attitude is one of harmonization and satisfaction through adjustment; and the Indian attitude is escapist, recognizing the futility of desire and the search for satisfaction. Liang held that these cultural wills succeeded one another in dialectical sequence. Western culture was then in the ascendant, but it would give way to the Chinese, resulting in a higher world civilization which would mold the scientific and material successes of its predecessor to man's intuitional, moral, and ethical nature. In the distant future, the Indian attitude would displace the Chinese attitude, and another new era would begin. Because the Tung-hsi wen-hua chi ch'i che-hsueh attempted to break through the iconoclasm of the Literary Revolution and the May Fourth Movement and to affirm the relevance of the past to the solution of contemporary Chinese problems, its publication resulted in heated controversies about the worth of traditional values, the function of religion, and the nature of culture and cultural change. However, Liang's views did not receive much support. He himself was dissatisfied with the book, and he later had it removed from circulation for three years. He planned an emended version of the work, but it never appeared. Liang Shu-ming left Peking University in 1924 and became the principal of a middle school in Ts'aochou, Shantung. In accordance with his theories, he hoped to institute a new kind of education which would achieve ethical as well as intellectual development through the fellowship of faculty and students. He also hoped to found a university, but his plans soon foundered. He returned to Peking in 1925, where he spent two years living with a small group of students and seeking a worthwhile program in which to participate. He soon became interested in the rural reconstruction movement.

Liang worked for a time as head of the Kwangtung-Kwangsi reconstruction committee and visited the major reconstruction projects in China. Early in 1930 he resigned from office to join P'eng Yü-t'ing and Liang Chung-hua in establishing Honan Village Government College. He also edited the Ts' un-chih yueh-k'an [village government monthly]. The project collapsed soon after Han Fu-chü (q.v.), the governor of Honan, was transferred to Shantung. Han soon invited all of the men who had been associated with the Honan project to found a similar institution in Shantung. The Shantung Rural Reconstruction Research Institute was founded in 1931, and Liang Shu-ming served as its guiding spirit until 1937. Liang regarded the Shantung project, which exercised direct control over Tsoup'ing hsien and Hotse hsien and which operated in a lesser way throughout the province, as the necessarily small beginning of a nation-wide movement rather than as an experiment of limited scope. By this time, Liang no longer believed in the cultural dialectic set forth in the Tung-hsi wenhua chi ch'i che-hsueh. He now argued that because China was different from Western nations, it would be wrong to import such Western political systems as democracy and Communism. He denied the validity ofapplying Marxist class analysis to China and held that the derangement of Chinese society in the name of class struggle was the result of the irresponsible actions of men who were using Marxist theory to obtain power for themselves. Accordingly, besought, through the Shantung program, to ameliorate social relations peacefully by creating through education an enlightened leadership of intellectuals and the peasant masses and integrated institutions which would combine the functions of local self-government with economic cooperation. He believed that education of the correct sort would obviate the need for revolution. However, Liang was unable to test his theories for any length of time because the outbreak of the Sino-Japanese war in 1937 forced the Shantung Rural Reconstruction Research Institute to close.

During the early war years, Liang served on the National Defense Advisory Council and its successor, the People's Political Council. After touring Communist-held and front-line areas, he became convinced that the Kuomintang- Communist united front was in jeopardy. Accordingly, in November 1939 he helped to found the T'ung-i chien-kuo t'ung-chih hui [united association of comrades for national construction] to act as a third force in pohtics and to maintain the united front. The organization was composed of representatives from such minor pohtical parties as the China Youth party and the National Socialist party. In 1941 it was superseded by the League of Chinese Democratic Political Groups {see Chang Lan). Liang went to Hong Kong to establish and edit the league's newspaper, Kuang-ming pao [light], which began publication in September. Its staff included Huang Yen-p'ei, Hsü Fu-lin, and Shang Yen-ch'uan. When Hong Kong fell to the Japanese in December, the Kuang-ming pao was forced to suspend publication.

In January 1942 Liang Shu-ming took refuge in Kweilin, where he remained until a Japanese offensive in the summer of 1944 forced him to flee again. By October 1945 he had reached Chungking and had become secretary general of the China Democratic League, the successor of the League of Chinese Democratic Political Groups. He held this office until October 1946, by which time he had alienated the Chinese Communists by proposing National Government occupation of the main Manchurian rail lines and had angered the Kuomintang by investigating and writing a report on the assassination in Kunming of the prominent liberals Wen I-to (q.v.) and Li Kung-p'u. After retiring from office, Liang remained in Chungking, writing, teaching, and occasionally expressing his views in newspaper articles. After declining to participate in the Chinese People's Political Consultative Conference of September 1949, held to establish the Central People's Government of the People's Republic of China, Liang Shu-ming emerged from retirement in January 1950 to accept nomination as a specially invited delegate to the National Committee of the conference. During the next few months he traveled extensively, observing rural work in Hopei, Shantung, and Szechwan. In October 1951 he published in the Kuang-ming jih-pao a lengthy statement entitled "Changes I Have Undergone in the Past Two Years," which was a recognition of Chinese Communist successes, a restatement of his earlier views, and an explanation of why his viewpoint had not changed. In answer to criticisms of this article, Liang said that he was open to persuasion but that his critics had not dealt substantively with any of the crucial issues on which he differed with the Chinese Communists. In 1953, at a high-level meeting of Chinese Communist leaders, Liang strongly criticized the differences in the living standards of workers and peasants. He was hooted off the rostrum, and it was only because Ch'en Ming-shu (q.v.) intervened on his behalf that more serious steps against him were not taken. In the wake of the Communist-sponsored campaigns against Hu Feng and Hu Shih in 1955, Liang became the target of scores of articles, study meetings, and demonstrations. He was denounced as an outstanding example of feudal reaction and its philosophic handmaiden, subjective idealism, whose political function was to dull the consciousness of the masses. He also was identified as a partner and accomplice of Hu Shih. Liang remained silent until February 1956, when he announced that although he had welcomed criticism, he had experienced difficulty in subduing the urge to resist. He went on to say that his understanding of Marxism had improved and that he was continuing to study. He refrained from criticizing the government during the Hundred Flowers campaign, thus escaping criticism during the ensuing anti-rightist movement. Among Liang Shu-ming's important works are the Shu-ming su-ch'ien wen-lu [Liang Shuming's essays: 1915-1922], the Shu-ming su-hou wen-lu [Liang Shu-ming's literary compositions written after the age of 30], the Chung-kuo min-tsu tzu-chin yün-tung chih tsui-hou chueh-wu [the final awakening of the Chinese people's self-salvation movement], the Hsiang-ts'un chien-she li-lun [theory of rural reconstruction], the Liang shuming chiao-yü lun-wen chi [Liang Shu-ming's collected essays on education], and the Chung-kuo wen-huayao-i [essentials of Chinese culture]. Little is known about Liang Shu-ming's personal life. He was married sometime after 1918 and is known to have had two sons. 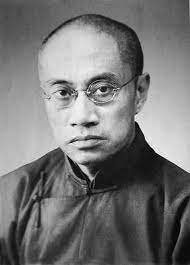