Liang Shih-ch'iu (1902-), literary critic, teacher, and translator of Western literature who was a leading figure in the Crescent Moon Society, a group which upheld the individual and aesthetic purposes of literary expression in opposition to the cause of proletarian realism.

Although his ancestral home was in Hangchow, where his grandfather had amassed a modest fortune as a customs official, Liang Shih-ch'iu was born in Peking. His father, Liang Hsien-hsi, was employed by the Peking police force. Liang Shih-ch'iu completed his middle school and college preparatory work at Tsinghua Academy. In the summer of 1923 he went to the United States to enter Colorado College in Colorado Springs. Wxn I-to (q.v.), a friend and schoolmate from Tsinghua, enrolled there at the same time. After being graduated the following summer, Liang moved to Cambridge, Massachusetts, to begin graduate work in English literature at Harvard University. He pursued the same field of study at Columbia University during his third and final year in the United States.

While at Harvard, Liang Shih-ch'iu came under the influence of Irving Babbitt, whose conservative views on the value of continuity and tradition in literature Liang adopted. In a paper written for Babbitt entitled "The Romantic Tendencies in Modern Chinese Literature," Liang scored contemporary Chinese writing for exhibiting all of the defects of nineteenth-century romantic literature at its worst. In its place, Liang proposed a national literature which would borrow its discipline from the literature of traditional China and its form from the classic literature of the W^est. Liang was particularly anxious that Chinese readers should be acquainted with the masterpieces of the European tradition. Accordingly, he devoted much of his time to translating W^estern classics.

Soon after returning to Peking in the summer of 1926, Liang Shih-ch'iu accepted a position at National Southeast University. The following spring he married Li Shu-fang. Because of the social and political turmoil accompanying the advance of the Nationalist armies northward during the summer, he moved to Shanghai, where he remained for the next three years, teaching at Chinan and other universities. Between 1930 and 1934, he taught at Tsingtao University in Shantung.

In the early years of the Nationalist period, Shanghai was a primary locus of cultural and literary activity. The doctrine of literature as an instrument of political action gained widespread acceptance, particularly in leftist circles. To combat the propaganda emphasis that such theories lent to literature, Hu Shih, Hsü Chih-mo (qq.v.), and Liang Shih-ch'iu in 1928 organized the Crescent Moon Society. In its official organ, Hsin-yueh [crescent moon], they sought to expound the ideal of a literature of liberation through which the Chinese people could achieve spiritual freedom. Liang argued strongly for the independent, individual, and aesthetic purposes of literary expression. His opposition to the cause of proletarian literature eventually brought him into sharp conflict with Lu Hsün (Chou Tso-jen, q.v.), among others, and secured for him a position of national prominence in the realm of letters. Liang's involvement in the polemics of these years resulted in a number of volumes devoted to the discussion of literary questions and Liang Shih-i principles: Lang-man-ti ku-tien-ti [the romantic T. I-fu and the classic] published in 1927, an expansion H. Yen-sun of his Babbitt article ; W'en-hsueh ti chi-lü [literary discipline], published in 1928; Wen-i p'i-p'ing lun [principles of literary criticism], published in 1934; and P'ien-chien chi [prejudices]. Yuehhan-sun [Dr. Samuel Johnson], also published in 1934, was a critical biography. Liang was also active as a translator. In 1928 he published A-po-la yü Ai-lu-i-ssu cK'ing-shu [the love letters of Abelard and Heloise] and in 1929, P'an Pi-te [Peter Pan]. He also translated Silas Marner and Wuthering Heights.

In 1934 Liang Shih-ch'iu left Tsingtao University to become head of the English department at National Peking University. His interest in translation continued, but its focus shifted to the plays of Shakespeare. Liang translated 20 of Shakespeare's plays into pai-hua [the vernacular]. Collected as So-shih-pi-ya ming chit [the famous plays by Shakespeare], the translations were published in Taipei between 1953 and 1957. Passages of plain prose and of blank verse are given simply as prose, but rhymed lines are translated into corresponding rhymed Chinese lines, to preserve the contrast.

From 1937 to 1946, Liang resided near Chungking. He lectured, serv^ on the People's Political Council, and work^Lin the Kuo-li pien-i so [national institute o^fckanslation and compilation]. His collection ofi?«niliar essays, Ya-she hsiao-p'in [sketches by a cottager] published in 1949, was written at this time. From 1946 to 1949 Liang was a professor of English literature at National Peking Normal University. He moved to Taiwan in 1949. He was first chairman of the English language department of Taiwan Provincial Normal University and, subsequently, dean of its college of arts. In Taiwan, Liang published several books, including Alei-kuo shih tsen-ma-yang-ti i-ko kuo-chia [what America is like], T'an Hsü Chih-mo [a chat on Hsü Chih-mo], Ch'ing-hua pa-nien [eight years at Tsinghua], and Wen-hsueh yuan-yin [literary affinities]. He also edited the Tsuichin Ying-Han tzu-tien [current English-Chinese dictionary], which was published in Hong Kong in 1958. 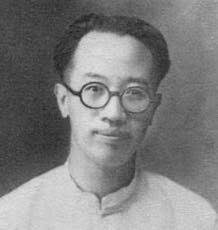