Li Ta-ming (1904-18 March 1961), newspaper publisher and editor in China and the United States and a leader of the Constitutionalist party. He succeeded his long-time associate Wu Hsien-tzu as editor of the Chinese World in San Francisco.

Soon after the birth of Li Ta-ming on the island of Kauai, Hawii, his family moved to Honolulu, where they lived until Li was six sui. His father, Li Lin, was a merchant. Li Ta-ming had two living elder brothers (the first-born son in the family having died before 1904) and a sister. In 1909 the Li family left Honolulu and returned to Li Lin's native home at Shekki, Kwangtung, where the elder Li died two years later. After receiving his early education in Shekki, Li Ta-ming went to Honolulu in 1918, where he published a Chinese-language periodical Ch'en-hsi [dawn]. Although only 15 sui, he spent almost a year in Honolulu and wrote almost all of the articles for his magazine. He returned to China in 1919 and studied for two years in Canton and Hong Kong.

In 1921 Li Ta-ming helped to found the Ta-t'ung jih-pao [Ta-t'ung daily] at Hong Kong and made the acquaintance of Hsü Ch'in and Wu Hsien-tzu (q.v.), who were long-time associates of K'ang Yu-wei (q.v.). Through them he met and became a supporter of K'ang Yu-wei. Li continued to write for the Ta-t'ung jih-pao until 1926 and became known as an able political commentator. For a time, he and Ch'en Tu-hsiu (q.v.), one of the founders of the Chinese Communist party, engaged in heated debate on political matters.

In 1926, at the request of Hsü Ch'in, Li went to Hawaii, the United States, and Europe to assess the activities of Constitutionalist party branches and to direct anti-Kuomintang propaganda campaigns. After returning to Hong Kong in March 1927, he began to draft a plan for the reorganization of the Constitutionalist party for submission to K'ang Yu-wei, but he abandoned it when K'ang died at Tsingtao on 31 March. Li continued to work for the Constitutionalist party, and in 1928 he went to San Francisco to assist Wu Hsien-tzu in publishing the party newspaper Chinese World.

Beginning in 1929, he also served as principal of the newly established Confucian School there. Li Ta-ming returned to China in 1932 and founded the Oriental Press at Hong Kong. When this enterprise collapsed in 1934, he went to Shanghai, where he served as an adviser to a leading department store, the Sun Company. In 1936 he made a tour of north China and wrote the well-known Pei-yu yin-hsiang [impressions from a northern journey], which was published in Shanghai in 1937. He went to Hawaii in 1938 and became editor of the New China Daily Press, a Constitutionalist party newspaper. He also taught history and philosophy at the Mun Lun School in Honolulu.

Soon after the Japanese attacked Pearl Harbor in December 1941, the American authorities in Honolulu prohibited the publishing of Chinese and Japanese newspapers in the area. Li protested the ban and caused it to be lifted. At the request of the Constitutionalist party, Li Ta-ming went to San Francisco in 1944 to succeed Wu Hsien-tzu as the editor of Chinese World. At the time of the United Nations Conference on International Organization in 1945, he met with Carsun Chang (Chang Chia-sen, q.v.) to discuss the possibilities of combining the Constitutionalist party and the National Socialist party to form a new political group. The Constitutionalists met in November at Montreal, Canada, and renamed their organization the Chinese Democratic Constitutional party, with Wu Hsien-tzu as chairman and Li Ta-ming as his deputy and head of the American overseas headquarters. The new name proclaimed that the party had outgrown its royalist tendencies.

In 1946 Li Ta-ming returned to China and participated in the August meeting in Shanghai at which the Democratic Constitutional party and the National Socialist party combined to become the Democratic Socialist party, with Carsun Chang as chairman and Wu Hsien-tzu as vice chairman. At that time, the National Government was attempting to undercut Communist influence and to broaden its own structure by offering posts to members of minor political parties. Li Ta-ming was appointed minister without portfolio, but he refused the post. Li and other Constitutionalists soon became dissatisfied with the policies of the Democratic Socialist party and withdrew from it. Li went to Honolulu in 1947, but returned to Nanking the following year as a delegate to the new National Assembly.

In 1949 he went to San Francisco and resumed management of the Chinese World, which then had the largest circulation of any Chinese-language daily in the United States. Under his direction, the Chinese World became the first overseas Chinese newspaper to inaugurate an English-language section. Li launched a New York edition of the Chinese World in 1950, but it was not a success. Because Wu Hsien-tzu retired from politics in the 1950's, Li Ta-ming became the leading spokesman for the Democratic Constitutional party. He continued to oppose the Chinese Communists and to criticize the Nationalists on Taiwan until his death on 18 March 1961.

He was survived by his wife, Kuo Hsiu-ch'un (Lily Kwok), whom he had married in San Francisco in 1946, and by his two sons, Pao-lin (Paul) and Chün-ch'ao (John). 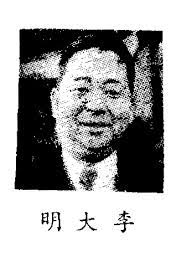