Ting Fu-pao (4 August 1874-1952), a prominent Shanghai physician who also made important scholarly contributions in the fields of Buddhism, traditional Chinese literature, and philology.

Wusih, Kiangsu, was the birthplace of Ting Fu-pao. His grandfather, Ting Wen-ping, a minor official at Haiyen, Chekiang, had been killed during the Taiping Rebellion. His eldest son, Ting Chieh-an, was Ting Fu-pao's father. Although the family owned more than 100 mou of land, Ting Chieh-an had to teach school to supplement the family income, for the district had not yet recovered from the ravages of the Taipings. Ting Fu-pao began school at the age of seven and received additional instruction from his elder brother, Ting Pao-shu, who also taught Wu Chih-hui (q.v.). At first Ting Fu-pao progressed slowly in his studies, for he found kite-flying in winter and fishing in summer more congenial than the Chinese classics. In 1889 he entered the local academy at Wusih, and in 1895 he transferred to the Nanching Academy in nearby Chiangyin, then headed by the celebrated scholar Wang Hsien-ch'ien (q.v.). Wang advised Ting to work intensively on the Erh-ya, Shuo-wen chieh-tzu, Wen-hsuan, and Shui-ching-chu and to collate all the annotations to each text. Ting complied with his teacher's instructions, concentrating on the Shuo-wen chieh-tzu and thus laying the foundations for his later achievements as a compiler and editor.

Ting Fu-pao passed the sheng-yuan examinations in 1896, but failed the chü-jen examination the following year. His father died of consumption in September, and Ting decided to fulfill his filial obligation by . making no further attempts at competitive examinations. In 1898 he returned to the Nanching Academy, specializing in mathematics under the authoritative guidance of Hua Heng-fang and Hua's younger brother Hua Shih-fang. He also taught at another school to supplement the family income. In 1899 Ting's sister died, also of consumption, and Ting found himself without funds. It was at this point, he asserted later, that he set about studying the chapter on wealthy merchants in the Shih-chi of Ssu-ma Ch'ien. In 1900 he produced his first work of scholarship, Suan-hsueh shu-mu Vi-yao [an annotated bibliography of mathematical books]. From 1900 to 1902 he studied medicine and chemistry in Soochow. He then entered the Tung-wen hsueh-she, which had been established by Sheng Hsuan-huai (q.v.). He became fluent in Japanese and in 1902 published the Tung-wen-tien ta-wen [questions and answers on Japanese], which proved so popular that an edition of 5, 000 copies soon was exhausted. Later that year, he joined Li Yuan-i and Hua Wen-ch'i in founding the Wen-ming Book Company. Over the years this company published no fewer than 83 medical treatises translated and edited by Ting under the series title I-hsueh ts'ung-shu [the medical library].

In 1903 Ting Fu-pao went to Peking to teach mathematics and physiology at both Ching-shih ta-hsueh-t'ang [imperial university] and the I-hsueh-kuan [bureau of translation]. He returned to Wusih in 1906 and established the I-shu kung-hui [book translation company], which, however, failed within a year. Also in 1906 Ting published the first of a series of compilations, the Han Wei Liu-ch'ao ming-chia chi [collected writings of illustrious writers of the Han, Wei and Six Dynasties]. He went to Shanghai in 1908 to practice medicine, and in 1909 he passed a medical qualifying examination in Nanking. Later in 1909 he was sent to Japan by Tuan-fang (ECCP, II, 780-82), who wanted him to study Japanese medical schools and hospitals, and by Sheng Hsuan-huai, who sought information about the organization of orphanages. After a month's stay in Japan, Ting returned to Shanghai and established the Chung-hsi i-hsueh yen-chiu hui [Sino-Western medical research society]. The organization enjoyed the official sanction of the local government and maintained a membership of several hundred medical men. About this time, Ting also began to publish a medical journal, the Chung-hsi i-hsueh pao [Sino-Western medical bulletin].

From his medical practice, publishing ventures, and writings, Ting Fu-pao soon accumulated the wealth he had desired as a young man. In 1916, after recovering from a serious illness, he began to turn his attention to Buddhist studies. That year saw the publication of his continuation of the standard Li-tai shih-hua [discussions of poetry through the ages] under the title Li-tai shih-hua hsü-pien, and of the Ch'uan Han San-kuo Chin Xan-pei-ch'ao shih [collected poetry of the Han, Three Kingdoms, Chin, and Northern and Southern Dynasties periods]. He adopted a vegetarian diet in 1918 and assumed the status of a chü-shih, or lay monk. In 1921 he published the Fo-hsueh ta-tz'u-tien [dictionary of Buddhism], based on the Bukkyo daijiten of Mochizuki Shinko. His preoccupation with Buddhism persisted until 1924 when his interest in compiling and editing revived.

In 1925 Ting completed and published his philological study of the Wen-hsuan, entitled Wen-hsuan lei-ku [philological notes on the Wen-hsuan categorically arranged], a rearrangement by stroke-order of the commentaries of Li Shan (658-718) and others. Two years later he produced his Ch'ing shih-hua [Giving dynasty discussions of poetry]. These two works were dwarfed, however, by Ting's monumental Shuo-wen chieh-tzu ku-lin [collected glosses on the Shuo-wen chieh-tzu], published in 1932. Basically a compilation of photolithographed clippings from 1 82 separate works of commentary on the first great Chinese dictionary of Hsu Shen (c.100), the Shuo-wen chieh-tzu ku-lin was over three decades in the compilation. In the field of numismatics, which began to absorb his interest in the early 1930s, Ting produced the Ku-ch/ien ta-tz'u-tien [dictionary of ancient coinage] in 1938, with a supplement in 1939.

Ting was also noted in his later years as a philanthropist. He made many donations of cash and books to public and private schools and libraries, particularly those in Wusih and Shanghai. Little is known about his personal life except that he married in 1897 and that his wife bore him seven children: five sons and two daughters. Ting's wife died in 1920. 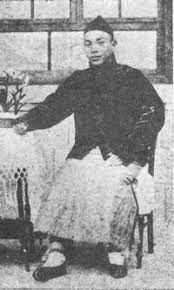